As many of our members will know, Pritzker Prize-winning architect I.M. Pei, FAIA, RIBA, Hon. AIA (HK) passed away on 16 May at age 102. We join in mourning the loss of a visionary architect and gracious gentleman.

Pei was prolific and successful across a wide range of architectural genres, and we will remember him for a daring modernist style that was nonetheless grounded in history. In his remarks during the I.M. Pei Centenary Symposium in 2017, AIA Hong Kong founding president Professor Nelson Chen, FAIA, FHKIA, FRIBA, noted that Pei “made it all look so easy. As much as he was a master form-maker, he was equally a master strategist – conceiving and synthesizing seemingly impossible sites and complex problems with singular design solutions that were daring and innovative – while ultimately being compelling and timeless.”

The Guangdong-born architect was the mastermind behind the bold Louvre pyramid in Paris, the East Wing of the National Gallery in Washington, D.C., Japan’s Miho Museum near Kyoto, the striking Museum of Islamic Art in Qatar’s capital, Doha, and the landmark 70-storey Bank of China Tower here in Hong Kong. The Bank of China Tower was completed with Sherman Kung, AIA, as associate architect (pictured below with Pei).

We share the sentiment of the Pritzker Architecture Prize jury who in their citation declared that Pei gave the 20th century some of its most beautiful and inspiring exterior forms and interior spaces. 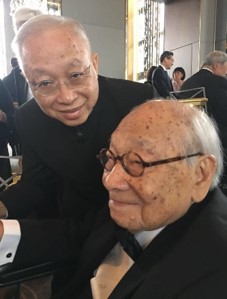