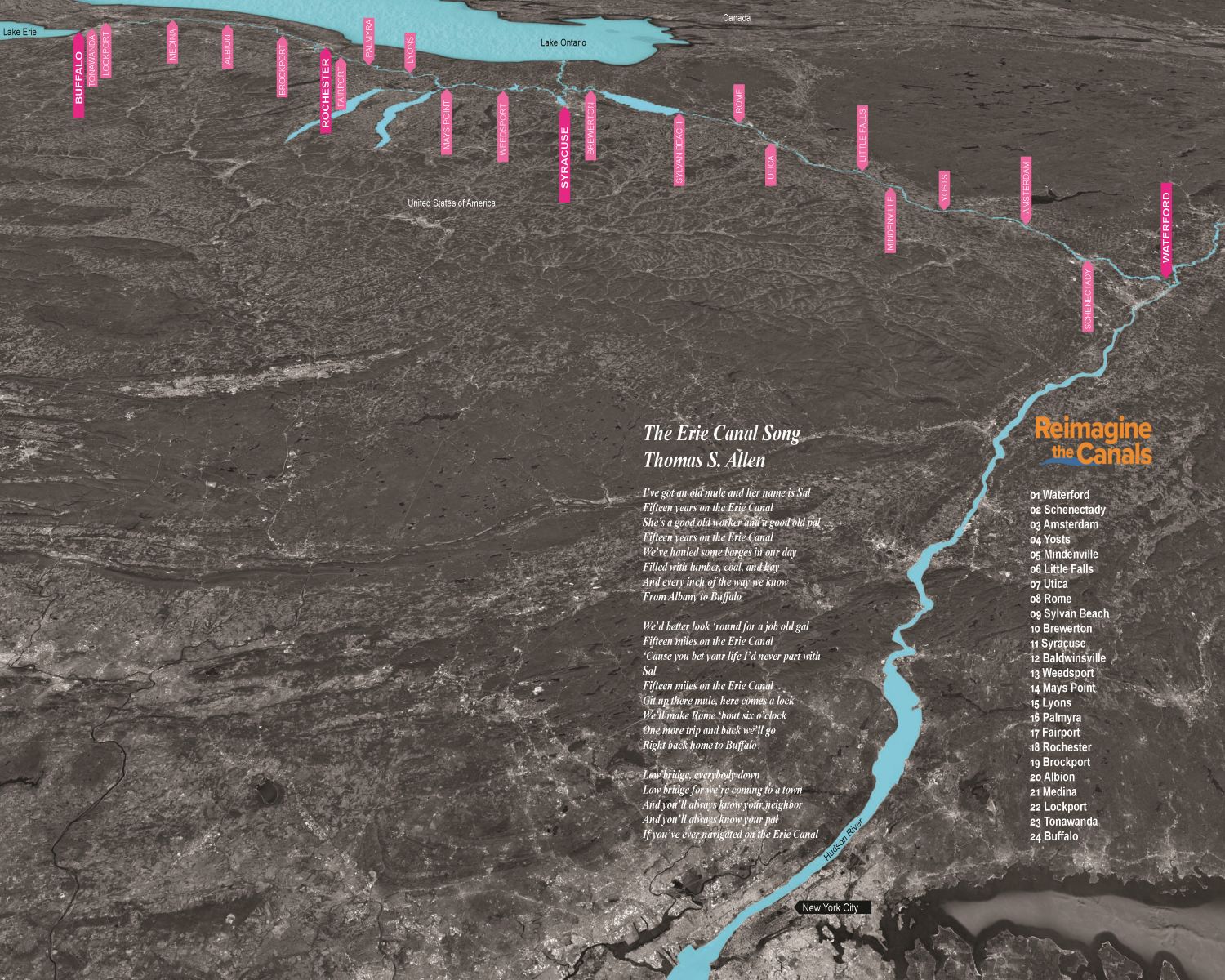 Known as the mother of cities, the Erie Canal gave birth to many settlements all along its shore. Villages along the canal boomed into dynamic cities. It helped the nation to develop a root beyond its frontier by connecting east and Midwest. Prosperity dispersed through navigations of the water body. The Erie Canal became the foundation of many canal towns and cities where commerce and manufacturing industries came into fruition. Today, 80% of the upstate population still live within 25 miles of it.

The gravitation of populations along the Erie Canal drives the development of various infrastructural networks across New York State. Majority of airports in New York State are serving cities located right along New York State Canal System. As we sort the sizes and populations of the cities along the canal system, we can easily identify Albany, Syracuse, Rochester, and Buffalo as the major hubs, all within 1.5-hour flight to New York City. These four major magnets are also connected by Amtrak’s Empire Service Route with 1.5-to-2-hour train rides in between and with train stations located within proximity to the city centers.

In between these four major cities, we have identified 20 more points of interventions along the canal system and New York State Thruway (I-90) to create a rhythm of 20-to-30-minute driving or 1-to-2-hour cruising intervals, marking and conducting the journey through the Erie Canal. Aside from looking at utilizing the existing infrastructural systems to activate the points of interventions, we also incorporate the existing and proposed Empire State Trail as a mean of access as well as potential catalytic attractions. These 24 sites are carefully selected ( as a result of making use the “Character Map” we have produced) to reflect how the Erie Canal still shapes New York today and to signify its role as National Heritage Corridor across New York State.

Celebrating Erie Canal’s 200th birthday as well as National Park’s 100th birthday, we are connecting the locks and engineering marvels along the Erie Canal with the National Heritage Corridor and the Empire State Trail. To exploit this unique situation where man-made interventions intertwine with nature, a new type of tourism is introduced to revitalize the essence of its heyday during industrial revolution when rust belt commerce was most viral. A series of cultural interventions will give new lives and meanings to these otherwise dormant heritage sites by arousing visitors’ awareness of the interesting juxtapositions between nature and culture. Taking the example of the revived archipelago in the Setouchi Inland Sea in Japan, the intent is to utilize arts and culture as catalysts for nature, heritage, businesses, and tourism to revive its glorious days and to claim new opportunities for New York State.

To support this new model of ecological and sustainable tourism, we are also proposing to convert latent buildings like vacant mills and factories, in the once glorified manufacturing towns and villages, into accommodation along the Erie Canal. New York State Canal Corporation can operate them as potential profit generators. The Spanish Government has implemented similar strategy called The Parador Hotels, a chain of luxury accommodations in castles, palaces, convents, monasteries, fortresses and other historic buildings throughout Spain. The group also operate a few modern Spanish hotels, built in the traditional style, in areas of outstanding beauty.

It is important to note a project of this scale will undoubtedly have to be implemented in phases; the intention of this proposal is to illustrate the fulfilled potentials and the accidental possibilities growing out of these interventions.